Up until about a week and a half ago, I’d never heard of Duck Dynasty. A co-worker had mentioned it to me and suggested that I check it out – something about a southern redneck family and duck hunting, or something or another. I figured, alrighty I’ll check it out sometime. Fast-forward to a couple of days ago, I saw this in my Twitter feed: 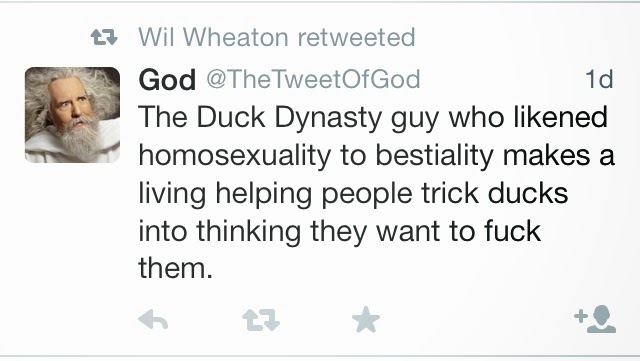 Grabbing my attention, I had to figure out what the hell all of the fuss was about. As the story began to go viral, we got this:

and from Bobby Jindal:

and from Sarah Palin (Thank you, Universe): 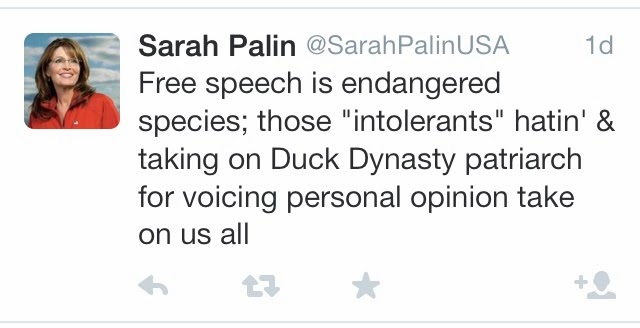 Let’s be clear about one thing, this story has absolutely nothing to do with free speech. The NSA goons aren’t kicking in the door and the state isn't squelching someone’s ability to get their ideas out into the world. What we do have is the most brilliant marketing campaign I’ve witnessed in perhaps the history of my existence, and I wonder if Sarah Palin is in on the gig or if she is just an unforeseen added bonus?

To get an idea just how big this show already was before the controversy, check out this article from back in August, which reported that the show has 11.8 viewers. That’s a pretty stunning figure, especially for a program that no one I know has ever actually seen or heard of – and trust me, I know a lot of people. I could be wrong, but this whole affair seems pretty fabricated as a means to bust into coastal markets. What better way to achieve this than by having your star character say, "Everything is blurred on what's right and what's wrong. Sin becomes fine. Start with homosexual behavior and just morph out from there, " in GQ. No shocker that a media watch group (in this case GLADD) was all over this story in two seconds.

When I read that A&E had suspended the cast member for the above statement, I wasn't all yippee, I was more like OMG another religious nut who thinks I’m the reason for the ills of society. Yawn. And NEWSFLASH, the guy is also a racist – something about black people being happier under Jim Crow. WOW, just double fucking wow that anyone could ever believe such a thing.  But hey, as every American loves to say, “It’s a free country, he can say/believe whatever he wants.”

So, all of the hoopla of the past few days made me want to actually watch Duck Dynasty (see, brilliant marketing). And I did, for about 15 mins and I was like, oh my god, this is the most unreal reality show I've ever seen, but I thought two of the brothers were kinda hot, so maybe I should give it another go sometime (side note, you know the porn parodies are being shot as I type this, right? Fuck Dynasty, Dick Dynasty, etc.). But really, this is what everyone has been going googoo gaga over? Seriously, I was expecting to see at least a somewhat authentic southern family; instead, it was more like über pampered actors assuming a persona – this wasn't actual southern culture, but a simulacrum. By the way, these actors, err family members get collectively over $200,000 per episode (according to the interwebs). Pardon my language, but Jesus Fucking Christ, A&E must be raking it in and they have certainly done their cost benefit analysis. Author Alyssa Rosenberg writes:

I absolutely understand the desire to make money off of either evangelical Christianity or American backwardness, which has increasingly been one of the staples of reality television. There is clearly a market for an underserved audience of religious Christians who would like to see themselves reflected in popular media more frequently. And there is clearly a market for being horrified by other people’s behavior. But it is exceptionally difficult, in a reality television context, to separate out and wall off the part of someone’s personality that is attractive and media-friendly from the parts that are less palatable to a mass audience. If you’re writing fiction for television, those attributes can get shaved off by the collective process of the writers’ room. But if you are, yourself, a reality television product, especially if you feel like you’re being suppressed or misrepresented, those parts of your personality and beliefs will inevitably out. Sometimes, the surprises are pleasant, as was the case on Here Comes Honey Boo Boo, where a family offered up as backwards and repellent proved to be tolerant, loving, and charming. But that is not often the case.

For the most part, reality television producers and the networks that air their work, have decided that these outbursts are worth the risk of continuing to sell highly specific personalities, precisely because the cycle of suspension, response, and temporary profit loss are so well-established at this point that it can probably be worked into a budget. I can’t imagine anyone at A&E is surprised that someone like Phil Robertson, who bills himself as a Bible-believing evangelical, believes that you can “Start with homosexual behavior and just morph out from there. Bestiality, sleeping around with this woman and that woman and that woman and those men,” or that he would say something like “It seems like, to me, a vagina—as a man—would be more desirable than a man’s anus. That’s just me. I’m just thinking: There’s more there! She’s got more to offer. I mean, come on, dudes! You know what I’m saying? But hey, sin: It’s not logical, my man. It’s just not logical.” The question was probably when, not if.

We’ve reached a point where the monetization of controversial figure as entertainment, their inevitable line-crossing, the organizations that exists to police that line-stepping, and the outrage that accompanies networks’ moderation of their own business strategies is an institution in and of itself. The relationships between all players in the cycle are symbiotic. But the power to influence culture and determine which political ideas are mass-marketable is decidedly real.

But, let’s back up for a moment…

There is clearly a market for an underserved audience of religious Christians who would like to see themselves reflected in popular media more frequently.

As naive as this sounds, I never really thought about that being the case before. So many of us in the gay community crave the same thing, as well as any other self-identified group. If all of us feel unrepresented, or poorly represented in media, then who is actually being represented?

Anyway, I've blathered on about this topic too long. Reality TV shows like Duck Dynasty are vile and disgusting, much like The Real Housewives of <<insert your city here>>, Being Bobby Brown, COPS, etc. - it’s for people who have no taste. I mean start with this hyper-heterosexual nonsense and just morph from there. It’s what is wrong with society. I mean, come on, dudes! You know what I’m saying?
Posted by nfdu at 4:30 PM